Get an email notification when another vessel like this is listed

We also have the following similar vessels currently advertised: 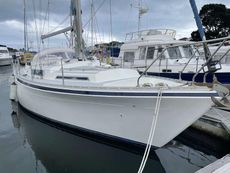 1979 Moody 36   £36,950
Moody 36 Sailing yacht fitted with a Yanmar engine (new in 2008). This 1979 Moody 36 has been kept in the RMYC Marina in Poole for its whole life! It has completed many sailed journeys and only ever motored in and out of its berth so the engine has had very little work to do. The boat has been maintained by the family and by the same gentleman since 1981 with services and works being carried out annually as needed. The rigging and sails have not been changed since 2002 although they have not been heavily used since being replaced. The boat was last out of the water in April 2021 where it was a... read more

Boats for sale
by continent

Boats for sale
by country